You have reached the old site. CLICK HERE to go to the new site, complete with online comic! 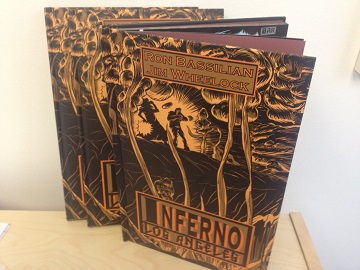 “Ron Bassilian has taken Dante’s Inferno and reworked and re-imagined the classic epic into an updated, powerfully emotional voyage through the stuff of nightmares, while Jim Wheelock’s artwork, sometimes reminiscent of the 1930s woodcut picture stories of Lynd Ward, conjures up a phantasmagoria of an often hallucinogenic intensity. A remarkable book.”

“I’ve always liked Dante’s Inferno, and I liked this book. They managed a solid take on the original, and made it easy to digest.”

Shannon Wheeler - creator of Too Much Coffee Man

Over 700 years ago, the poet Dante Allighieri found his way to the Underworld from the dark wood outside his native Florence, and the adventure he recorded in The Inferno still haunts us to this day.

Now, in modern times, a new traveler finds his gateway to Hell beneath the urban jungle of the “City of Angels”. Inferno Los Angeles revisits Dante’s journey, weaving new characters and contemporary scenarios with the timelessly familiar scenes Dante described. It is an adventure of pure imagination, fraught with obstacles, monsters, horrific visions and prophecies — all visualized in an epic graphic style. Journey with him, as each step down this human whirlpool brings new dangers and monstrosities, as we delve ever deeper into the torments of our own minds.

The first boxes of INFERNO LOS ANGELES will arrive from the printer just in time for us to premiere at the Alternative Press Expo in San Francisco, Saturday and Sunday, October 12-13. Come visit us at table 528.

Right now, you can pre-order INFERNO LOS ANGELES from our store!